You know that the field of Animation is trending and how! You name the area of interest, and you will find that animation can be applied anywhere. Either it is education, branding or marketing, entertainment, or some IT industries, every professional field uses animation for a better impact, creativity, and more profound understanding.

Among all, the animation social media graphics are stealing the show. You can get many actions, reactions, moments, situations, and GIFs by graphics. It is one of the best, mind-blowing, and super creative ways to share knowledge and information in an exciting manner. Nowadays, very few people tend to spend time on text reading. Some people don’t want to read a single line, and for those, animated videos are a blessing.

This article will show you the difference between 2D and 3D. You will get to know what does it mean to make a 2D animation as supposed to create a 3D one. Why they both are different than each other and what makes each one of them unique. Get all the answers to your confusion and understand some inside views and pros and cons of 2D vs 3D animation. Keep calm and read further.

Nowadays, it is easy to recognize the massive difference between 2D and 3D animation. The best example to understand such concepts is your favorite animation movies. If you are a 90’s kid, you may have seen many 2D films. If there is a 2D clip going on along with the 3D one, you can easily find out the difference, even when you are not from a technical background. However, they are much more complex to understand if you go in detail! The primary difference between the 2D and 3D animation is their making process! So firstly, let’s make a quick comparison.

What is 2D animation?

You must have seen the cartoons/films like Robin Hood, Closing Beauty, Taarzan, The Little Mermaid, etc. These are the best examples of 2D animation. It is the method which is used since the 18th or 19th century. Nowadays, technology has been evolved, and there are many software available to create 2D animations, which designs, colors, and also takes photographs of various characters and creations. It completes every single element on the computer.

Basically, in 2D, there is one drawing available, which is followed by some other pictures with a slightly different pose. Then the same process continues with other illustrations of respective actions/timeline. This process is developed for 24 frames a second. You will be surprised to know that each drawing is hand-made. Even the backgrounds used in this process are also hand-drawn. Here, pay attention to understand that everything – the characters, actions, and backgrounds – must get together to run as a final piece with the ratio of 24 frames per second! Creatively insane. Isn’t it?

Initially, artists used to create pencil drawings of every frame. After that, these drawings were painted onto clear plastic sheets called ‘cels.’ All these painted cels were clicked one by one at a time. Now, people use computers to create their object/character.

What is 3D animation?

You may like the animation of ‘Toy Story.’ It was the first 3D animation film by Pixar. Other films like Shrek, Jurassic Park, The Transformers, etc. are also leading the list. At present, there are many feel-good and moral movies made with animation which can quickly blow our mind.

Undoubtedly, 3D animation is the new and better technology than 2D. The benefits of 3D animation almost looks like a physical object. You can create as you want, set its lightings, see it from the front, back, above, and below. 3D gives a sense of realistic objects. There are many things which 3D allows like textures and lighting for stable visualization of the object. When you are animating in the 3D environment, you move the character like a puppet right down on the computer.

Difference Between 2D and 3D

In case you are still confused between the 2D and 3D animation, read this detailed explanation for better understanding.

In 2D animation, you draw the crucial first pose, and then the rest of the movements. Now you need to create all the frames in between them. Moreover, if the character closes its eyes, then the eyeballs do not exist anymore until you draw them again. This concept is one of the primary differences between the two types of animation.

In animation, the animators usually work for 24 frames per second. In 2D animation, there is one drawing every frame 24 times a second. That sounds like a lot of drawings, but it’s not that many! Because when there are no significant or fast movements, you can settle for one picture lasting for two frames. So that’s 12 drawings per second.

In 3D, it doesn’t work that way. When the 3D character doesn’t move at all, even for one frame, it seems incredibly wrong. It looks dead. So, the creators have to keep going with the creation. They either have to move the character or at least the background.

A moving hold is whenever you need a character to do nothing, but still feels it’s alive. It’s related to the frame rate only. Here, the animators always have to keep the character moving, even a little bit. Most of the time, it is not easy as there might or might not be any actions.

While in 2D, by stopping the motion, you can settle for a new drawing for every three to five frames or even not having an original sketch at all for a few seconds. It doesn’t look still or dead. And if the picture or the structure looks like, then also it is reasonably standard.

3D animation – How it works!

So, now we all know that animating in 2D means drawing a lot. But what does it mean to animate in 3D? How does it look? Well, let’s talk about this interesting process of making a 3D animation.

If you have a 3D model, which is rigged, it means programmed with all the right virtual bones and controls to make it as easy for animators as possible to go ahead with animating it. The model has powers in every key position in the body. You can grab one of the controls and move it around. But that only explains how we can move the model, not animate it.

Here it’ll get a little bit more complicated. 3D animation is all about graphs and curves. You must be thinking that math and formulas don’t belong in an artistic thing like animation. Well, knock knock! Here it is! Most of the features/controls of animations have six different curves you need to manage – all at once. There are translate curves like X, Y, and Z for up, down, left, right, closer and farther away, and three curves of rotation X, Y, and Z, also for the three axes of rotation.

These are the controls of only one hand. You have to do the same thing for each part of the character’s body. That’s a lot of curves. Some of the controllers have even more than six curves. So yes, an animator spends a lot of time to make just a character, looking at these graphs and curves. But just knowing about the curves, it still didn’t cover the animator process.

That’s all for the critical differences between 2D animation vs. 3D animation. I hope I was capable enough to explain the 2D vs. 3D. As I said, the animation is trending, although it is quite tricky to put the explanation in words. I just tried. 🙂 If you want to learn this emerging field, then there are many animation courses available. The scope of whiteboard animation is unlimited. Cartoons and animation films are highly acceptable forms of animation. Such concepts help us to explore and develop ideas that can take us to some other likable world. So what are you waiting for? Go and start exploring! 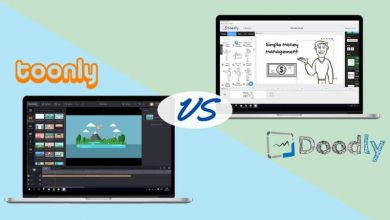 Toonly Vs Doodly- Which Software is Worth Buying